This post may contain affiliate links. As an Amazon Associate I may earn from qualifying purchases, at no additional cost to you. Thank you for supporting the brands that support The Herbeevore and our beehives! This post may contain affiliate links. As an Amazon Associate I may earn from qualifying purchases, at no additional cost to you. Thank you for supporting the brands that support The Herbeevore and our beehives!
I decided to have a little fun decorating a vegan birthday cake, and wanted to experiment with making a vegan buttercream icing to frost the cake with.  Instead of making a traditional buttercream with real butter, I used coconut milk which has a great consistency. This was a fantastic and flavorful alternative to canned frosting. It was sweet and had a really nice tang, which paired well with my cake!  Even my frosting-loving husband gave it a 10/10! One of the BEST Pantry Staple Buttercream Recipes

This vegan coconut milk buttercream recipe is a fantastic pantry-staple meal!  It uses almost all ingredients you would have in your dry pantry or cupboards.  You probably already have a lot of these ingredients on hand!  Keeping a well-stocked pantry makes it easy to come up with delicious and healthy meals using a few staples you can rotate.  I made a list of my Top 125 Plant-Based Pantry Staples that always keep on hand. And you can check out all my favorite pantry staple recipes on TheHerbeevore.com here.  By stocking up on healthy whole ingredients you can cook delicious recipes without a trip to the store! This coconut milk buttercream is what I call an Easy Weeknight Meal – which is on your table in under 30 minutes.  These quick and simple recipes are perfect for those nights when you want a from-scratch icing but don’t want to spend hours in the kitchen. I have a whole section of The Herbeevore dedicated to Easy Weeknight Meals, that are great for the whole family. From soups and stews, to pastas and proteins – a healthy meal can be on your table in no time.  Even faster than ordering from a bakery!

This vegan coconut milk frosting is a totally decadent dessert. I’m all about making recipes plant-based when I can. Vegan cooking does NOT have to be bland, boring, or flavorless… It’s quite the opposite when done right. By building meals around vegan pantry staples and swapping in a few plant-based ingredients you can make healthier meals for you and your family. I made a list of my 125 favorite vegan pantry ingredients that we use on a weekly basis, and check out all my vegan recipes here that are on The Herbeevore. These easy and healthy recipes are fantastic meatless and dairy free meals for your table. How Do I Make This Vegan Buttercream Icing?

& read through my Top 125 Vegan Pantry Staple Ingredients & Recipes that I stock my pantry with! Get the Same Ingredients I Used For My Vegan Butter Cream Frosting with Coconut Milk:

As always, if you make this vegan and gluten free coconut milk icing recipe be sure to leave me a comment, rate this recipe, and tag me on Instagram so I can feature you.  I love seeing all your photos of my recipe recreations! 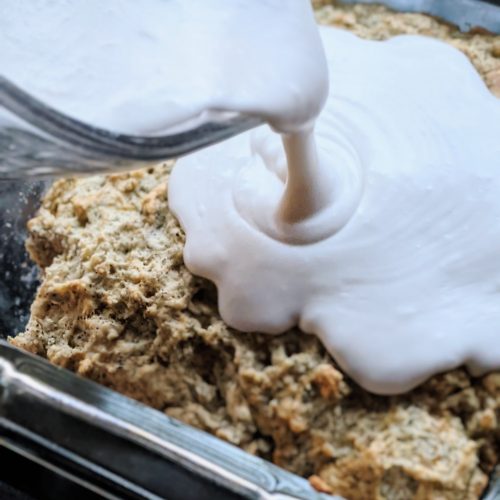 Prevent your screen from going dark

This post may contain affiliate links. As an Amazon Associate I may earn from qualifying purchases, at no additional cost to you. Thank you for supporting the brands that support The Herbeevore and our beehives!

This site uses Akismet to reduce spam. Learn how your comment data is processed.